A frog stole my shoes

Howard Moon and Vince Noir. Love them.
Besides watching a lot of silly British TV, I have been training a lot and racing not so much. I have not raced since Hamburg WCS in July because I didn't want to fly back over to Europe again for just a weekend and try to race well. It was a lot more difficult that I first thought. Not having a base in Europe was a bad idea. All of the World Cups and World Cup Series races are in Europe so to fly over there for a weekend to do one race is a little ridiculous. To make things worse, I do it alone. That is the one downside of being from Bermuda. So that being said I pulled out of  the Tiszaujvaros world cup, which I am hoping was not a bad decision and won't prevent me from getting into some of the world cups at the end of the year. Time will tell.
Next up for me is the Chicago Triathlon on the 28th of August. Time to pull out the TT bike again and this time ride it a little faster! Will be fun to race in Chi town as a pro because I grew up racing the Chicago kids race. BUT, this weekend I am going up to Leadville, CO for the Leadville 100 trail running race because Daimo is doing it! 100 miles of running..Crazy. I will be pacing him over Hope Pass for the second time. 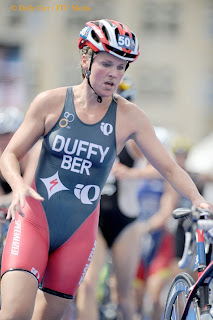 Picture from the WCS race in Hamburg. Notice the brown mustache......yeah the water was a little disgusting.
Posted by Flora Duffy at 12:33 PM