The Games- 3 Strikes and Out 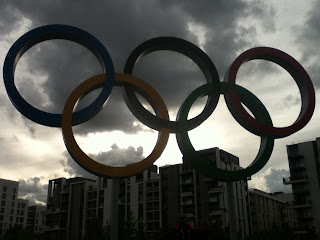 Well, at least out of luck and out of the running for a top ten position which is what I was aiming for. My preparation had been pretty well perfect. Business class flight Denver-London, a couple of nights in the village then the two nights before the race with my family in a hotel right next to the race venue, Hyde Park. Great new bright red Specialized Amira and matching helmet. I was ready to go. Weather iffy but not terrible. Cool though – definitely not like a Bermuda summer! Cool water too, resulting in a wetsuit swim which was strike 1 as the wetsuit helps the weaker swimmers which I am not. No big deal though I came out of the water in good shape and joined the chase pack which included all the big names. Unfortunately one of the big names – Emma Moffat came off her bike on a bad corner next to Buckingham Palace and I couldn’t avoid her so also hit the deck. Strike 2. I was pretty shaken up but got back on my bike to try and get back in the race although I figured my chances of a decent finishing position had just about disappeared. By the time I got on to the transition carpet at the end of the lap – yes the end of  lap #1 – I realized my back brake was sticking. Strike 3 and now I’m really p*****! Anyway I got off my bike, fixed the brakes and continued on riding with the back-markers. I got through the run having no fun whatsoever (although big thank you to all the Bermuda supporters out there for cheering so loud!) and finished 45th out of 55 starters. One consolation I suppose although its not much – the bike crash was not my fault. That corner was lethal and at least another five or six girls came down at the same spot which is ridiculous. It is unfortunate that something like that can ruin 4 years of hard work and dedication but that's racing. Apart from my race disaster the Games was a great experience. My family, boy friend and other family friends were in London to watch me race and share the experience, without them I would of been a mess.

The Village, the helpers, the crowds etc etc were all brilliant. Even the weather picked up after the first few days. The highlight of the Games was carrying the Bermuda flag at the closing ceremony. There is nothing like walking into a stadium of 80,000+ people with TV cameras everywhere. I had never been more proud to be Bermudian. One tiny complaint though – the speakers were all facing the crowd during the Closing Ceremony so we athletes could hardly hear anything. Even so - Spice Girls rule!

Finally a big thank you to all of my sponsors. Your support has been amazing and I am so proud to represent your brands- Specialized, Pearl Izumi, Oakley, Boulder Center for Sports Medicine, Skratch, and Breeze Bars. Last but certainly not least thanks to my coach Neal Henderson (apexcoaching) and my training partners.