It is my favorite time of year, summer! Warm weather, no school, farmers market, riding in the mountains, and people watching on Pearl street. Perfect. Although summer seems to be hiding! For the last week or so I have been riding in all my winter gear, which I am not happy about, but at least I have some super cute riding clothes from Specialized, to cruise around Boulder in. I finished school two weeks ago so I am free for 3 months to swim, bike, run, and actually recover between sessions instead of rushing to and from class. Yay! Good timing too because my body was starting to fall apart.

Just after I finished up finals in the beginning of May, I flew out to race in Monterrey, Mexico. This was my first World Cup of the year and I was a little nervous how the body would be after two stressful final weeks of school. The race turned out to go quite well although I did leave my running legs in Boulder.

Here is how it went down:
The swim in Monterrey is very unusual as it is in a water park boat canal. It made for a very interesting swim to say the least! The pontoon was laid out at the widest point of the canal, and 300 meters into the swim, it narrowed to maybe about 15 meters wide. The canal wasn't straight either, you had to navigate through the bends just adding to the fun (not). I was really lucky and got off to a great start and had clear water all the way to the turn around (major sigh of relief!!!). As I got out of the water to run over the bridge and dive back in the water, I looked back and saw a massive pack of 70 plus girls swimming down the narrow canal, I was very, very happy not to be in that mess. I came out of the water with 5 other girls, 20 seconds up from the chase group. 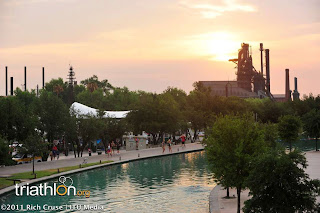 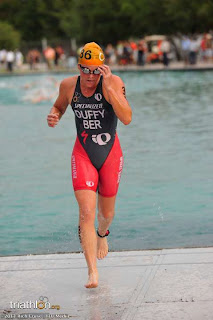 Coming out of the water.
The most notable person I came out of the water with was, Sarah Haskins. The two of us quickly pulled away from the 4 other girls, and worked together for the next 6 laps until. Sarah is a really strong rider so I was so excited to be off the front in a World Cup with her. It was a lot of fun (and really hard) riding with her. I ended up getting dropped 6 and 1/2 laps into the 8 lap bike, and had to TT alone for the last 1 and 1/2 laps. I came off the bike 20 seconds up from the chase group of 70 girls. 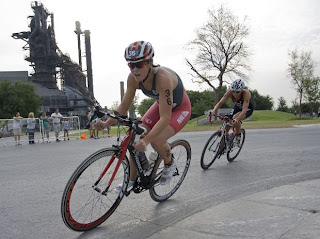 Haskins and I off the front.

The run was ok, I think the hard ride took it out of my legs. I was a little disappointed because I have been running well in training. There were a lot of strong runners in the field so they all went flying by me, which was really frustrating because it made my great swim/bike pointless. I ended up finished 26th, which was ok considering it was a very strong field. My running legs will come around sometime soon, I hope!

All in all, it was a really fun race. Being off the front, leading the race with Sarah Haskins was a lot of fun and a great experience. ITU racing has turned into a running race, so for Sarah to go on and win after breaking away on the bike was nice to see. The best part of the weekend was seeing my dad! He flew over from Bermuda to watch me race. I had not seen him since Christmas and don't get home often so it was really nice of him to take the time off from work and fly all the way to Mexico.

Now that it is summer and I don't have any school work to keep my busy, I might actually blog more often, maybe.

Ps. Big thanks to Jay Prasuhn from Lava Magazine for taking some awesome pictures at the world cup in Monterrey!!
Posted by Flora Duffy at 3:20 PM